Our new little guy!  He needed a new furever home.  That’s where my kids always seem to come in! He’s quite rambunctious and has been having a great time with the fam and the girls are crazy about him. 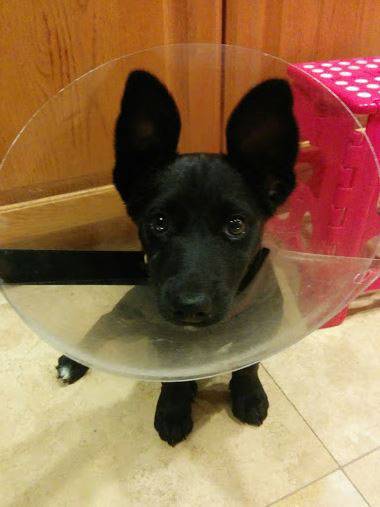 The Cat Done Did It?

But within days, Sven started having problems.  He was quieter, not eating as well and soon began throwing up with diarrhea, then culminating in his eating grass.  They were concerned  it might be some kind of intestinal blockage.  Possibly kitty litter was all they could think of.   A trip to the ER with his worried new parents ended up with Sven in surgery.

Well, many $$$$ later….  Yep!  Cat litter was the culprit for his bowel obstruction.  Technically, the cat contributed, but was just doing what comes natural!  hee. Plus,  he had several Polyps removed and Roundworm!  I thought that strange as the kids had paperwork showing the previous owner’s Vet had taken care of that.   Read more about Roundworm in DOGS on PetWebMD.

Well, a lot of cleanup in the house in necessary with that diagnosis, to protect the humans in his life, as it can be contagious.   I suggested Cleaning White Distilled Vinegar.   2 parts vinegar to 1 part water.  Great cleaner and safe for family and pets.

This is a good article regarding Roundworm and humans.

I was concerned the family was exposed when they weren’t aware.  There are a lot of great natural solutions to help protect us people folk from Roundworm to protection and/or prevention .     I’ll  blog about that soon!

Sven is doing well one and a half weeks later.  Not totally there, but coming along nicely.  Kitty litter safely tucked away where he can’t litter-gobble.

Usually his ears softly fold, but since getting his med no-itch collar, he keeps them perked at attention!  😀

Please SUBSCRIBE & Stay Tuned to see how our Sven is getting along.  🙂